The main target groups of machine translation have always been companies because they need translation resources more urgently than personal users at home. That's why, even today, the fact that most effective translation systems are very expensive and only affordable for companies and not for single users is obvious. It always takes a few years’ time until a software gets cheaper, because then new developments are rising and new technologies are born. For example Google's free translation tool can be used by everyone but we have to keep in mind, the poor translations this service generates are the results of an old version (dated 1998) of the famous Systran software. Current Systran applications cost about 300$ depending on the language package. Translations generated by today’s Systran applications are well-known for being very close to original meanings and exemplary grammar. A lot of human translators feel in danger of losing their jobs. However, at the moment machine translation systems are not likely to replace humans but they are thought to speed up the human translator's work and to make the translation process more effective.

The difficulties and barriers in machine translation are not always comparable to human translators' difficulties. A lot of people wonder why computers are not able to generate perfect solutions although they are very fast in executing even complex calculations and have more knowledge available of nearly every topic in the world. But the sober reality is that a machine has approximately no text comprehension and often can not understand any context and relation between two sentences or words. That's why it cannot interpret or infer words or terms in some cases. In addition, although there are electronic information sources and more than one digital encyclopaedia the system is missing common knowledge and general education. The problems of machine translation can be separated into ambiguous terms, grammatical structures and syntactic relations.

Today we know five important different types of machine translation systems which are described and illustrated[6] in the following: 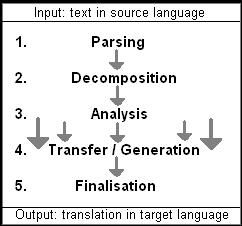 Troyanskii suggested a concept of machine translator that was able to look up words in a bilingual dictionary. He also outlined the principles of an interlingual system. This system was expected to parse and analyse a text and to save it in a language, called interlingua, similar to the human language Esperanto. The next step was a synthesis, and afterwards the text was converted into the target language again. This had been Troyanskii's proposal for a solution before the computer was invented. Because his ideas were unreachable and unrealistic in those days, Troyanskii has been remaining unknown for the next 20 years, although even today his ideas are relevant for many translation systems which are based on the so-called interlingua method.
After World War II, America was prepared to support linguistic research. Some of the army's researchers, who had assisted in developing code-breaking systems to decrypt secret messages during the war, were cooperating with linguists and scientists like Warren Weaver. Such expert teams were able to accumulate knowledge of both languages and machines. The best known collection of information on this topic is the "Weaver Memorandum" (1949). This document can be seen as the starting point of machine translation research.  The first success in translating showed the public demo of a machine translation. There, a machine was working on 52 Russian sentences using six grammar rules and a memory of about 250 words. The sentences were simple and short like “They prepared TNT.” Though, the Georgetown University students were proud of the output in 1954 and were able to convince a lot of companies to support and invest in machine translation research.